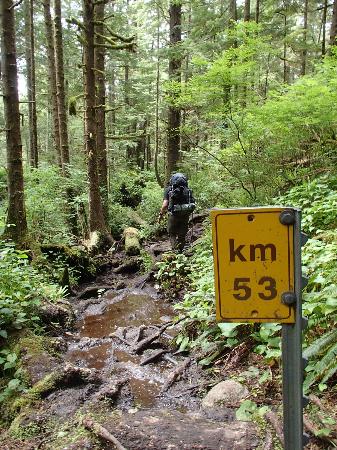 Address: British Columbia, Canada
Phone: 250-726-3500
Email: pacrim.info@pc.gc.ca
Website: pc.gc.ca
Open Hour:
Description: West Coast Trail has the reputation of being on of the most excutiating treks in North America, rewarding you with stunning backdrops in a cultural and historical landscape. West Coast Trail is a hiking trail that follows along the southwestern shoreline of Vancouver Island. It has infamous weather, where thousands of people come to storm watch. In fact, the weather and tides have been the demise of many catastrophic shipwrecks up until the late 1800’s, making the area known as the ‘Graveyard of the Pacific’. Beached survivors often met their makers once they made it to the jagged shoreline, provoking the government to rough-in a trail that is to this day isolated, physically challenging and potentially hazardous. West Coast Trail is not for the faint of heart, but welcomes those ready to take on the 75km challenge, explore the environment and learn a great deal about themselves, both mentally and physically.Can you conquer it?!