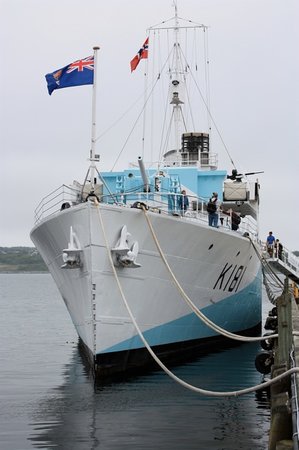 Address: 1675 Lower Water St adjacent the Maritime Museum of the Atlantic, Halifax, Nova Scotia B3K 5X5, Canada
Phone: 902-429-2132
Email: pr@canadasnavalmemorial.ca
Website: canadasnavalmemorial.ca
Open Hour: Sun – Sat 10:00 – 17:00
Description: HMCS Sackville, the last remaining Flower Class corvette in the world, symbolizes the extraordinary effort of Canadians seventy years ago during the Second World War. Restored to her wartime configuration she serves as a museum and memorial to those lost during the Battle of the Atlantic and to honour those who serve and continue to serve in the Naval Service of Canada. HMCS Sackville is berthed at Sackville Landing adjacent to the Maritime Museum of the Atlantic in the summer and in HMC Dockyard during the winter.

Other attractions in Halifax, Nova Scotia