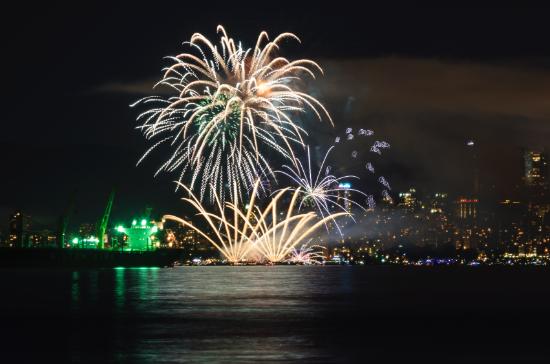 Address: English Bay Beach Park, Vancouver, British Columbia BC V6E 1V3, Canada
Phone:
Email:
Website:
Open Hour:
Description: One of the most spectacular firework displays in the world, it’s accompanied by music so the coloured lights look like they’re dancing to the rhythm, taking place over the English Bay in Vancouver at the end of July. Over three nights, international teams compete in the Celebration of Light, watched by more than a million spectators enjoying the world’s longest-running offshore fireworks competition, which sparked into life in 1990. You can buy tickets to enjoy the show at three designated venues, or simply head to the beach or other viewpoints, where you’ll enjoy a fabulous view and make a day of it before the fireworks get started at 10pm. Good places to watch the fireworks are English Bay or Kits Point, followed by Sunset Beach and Stanley Park.

Other attractions in Vancouver, British Columbia